As much as I hate to admit it, I’ve fallen for a scam that cost me 340 million ISK. There’s a site you may be familiar with called Eve-Bazaar.com. I came across it in local somewhere (red flag, anyone?), and after looking at it and looking at prices on the Jita market, I thought I may be able to make some nice profit. After all, the site seems pretty legit. The catalyst for me to throw my hard-earned ISK away at this site was the dev-blog for the summer expansion which talks about how faction battleships are getting a buff; the Rattlesnake in particular. I figured that the prices of these faction battleships would go up in price as the summer expansion gets closer, so I pulled the trigger and sent ISK to the contact as directed in the instructions. My profile updated accordingly, so far so good. After about an hour my status changed from “pending” to “in progress”…and there it has stayed for more than two weeks. I’ve sent a couple emails to the contact, but to no avail. They were nice emails, mostly asking for a followup on my order.

I can’t say that I’m surprised, but I can say that I’m disappointed in myself. I see something that’s too good to be true, and think to myself, “It’s probably legit; let’s do it!” When I came to the realization that I was scammed, it was then (and only then) that I decided to do some research on the scammers. I found a wealth of information (facepalm) on the topic, including some information on a blog that I already follow (double facepalm) called MarketsforISK. <—This guy’s blog is awesome for market stuff. I bet he’s never fallen for a scam like this.

So, no excuses. I messed up; and now I’m telling my readers about it. Why? I could say, “well because I don’t want the same to happen to you.”, but that’s not the reason. The real reason is because when Eve-bazaar comes clean, when their scam is all over and they come out with the numbers and the victims (me), just remember you heard it here first (/me hangs his head in shame). 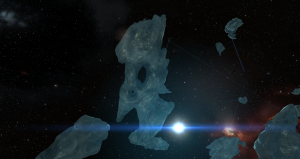 A chicken made of ice

In other, less embarrassing news, I’ve been mining some ice lately, and I happened across this Ice Chicken. Yes, it’s a chicken made of ice. A frozen chicken, if you will. This is in no way an attempt to try to make you forget my noobishness scam I fell for. It’s simply a giant chicken-shaped chunk of ice.

Additionally, I’ve been keeping up with The Incompitent Capsuleer, a newer pilot in New Eden and his blog. Please go give it a read, as it’s good stuff. Again, not an attempt to distract.

A Capsuleers Adventure in Eve Online

Tales of the first 500 PLEX

The "Balls and Bayonets Brigade" of EVE Online

Beyond the Splash
the greybill

A Blog about Eve Online

Not a bitter vet!

EVE Blog for both experienced and new by: Shinzo Shikimira

The training ground for indy pilots

A Blog about One Man's Journey across New Eden

EVE ONLINE from a twisted perspective